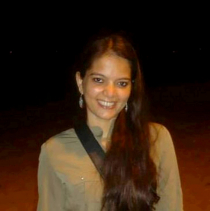 Trisha Bhattacharya is a creative writer born in India and brought up amid varied cultures and geographies. Travelling, reading, and matters concerning certain spiritual aspects of life, are some of her interests other than writing. She has certificates in creative writing and poetry and diplomas in travel and freelance journalism from reputed institutions. She writes fiction, features and poetry. Her earlier stint before writing was in the Indian garment manufacturing industry.

Her first piece of short fiction was printed in the Times of India, Kolkata edition, and another one, along with a poem of hers, had soon followed in the same paper. After this, she published a few short stories and micro-fiction in a few foreign literary journals. Trisha has contributed features to newspapers like the Deccan Herald, the Times of India, Contributoria, an online division of the Guardian Media Group, and various other print and online publications.

She writes fiction and poetry at present. The flexibility that fiction grants and the emotive expression permitted by poetry influence her work as a writer. She likes to think that her work as a features writer could have been influenced by her experience in fiction and poetry, keeping in mind facts and figures though. She believes that creativity is the current which flows under redacted language and style and doesn't have any boundaries.

Other than fiction, she specialises in writing features on travel, art and culture, interviews, craft, book analyses, and varied themes. She wants to contribute to the world of literature, through her work, in the form of fiction, features, poetry and other creative and writing-oriented endeavours.

Incorporating her skills as a storyteller and researcher, she thinks writing features is an act of discovery. Specialization in features: art and culture, travel, book-analyses, interviews, lifestyle, travel, education, spirituality, literature, and others. Her research and interviewing skills enable her to write about new subjects and themes.

Contributoria (This online and print publication backed by the Guardian Media Group,  is an archive now)

Ecofiction: creating environmental awareness, September 2015
A city between the pages, August 2015
Spooked by a few short stories, July 2015
A post-apocalyptic earth: imaginary context, predictions and a story, June 2015
Arundhati Roy’s The God of Small Things: an analysis and summary, May 2015
My Name is Red: a book about art, influences, relationships and intrigue, April 2015
A sea trilogy by Sir William Golding: to the ends of the earth, March 2015
A conference of writers, February 2015
The Luminaries: a book about the past, present and the future, January 2015

Features written prior to the series

Kolkatamirror.com (A division of The Times of India, Kolkata)

Chronicled on Canvas (Design)
The Goddess of Monsoon (Lifestyle)
A Fable Revisited (Flash Fiction)
Shantiniketan: Celebrating Rabindranath Tagore (Travel)
The Love Collection (Design)
Nothing plain about Jane (Art and Culture)
What is nostalgia and what is not? (Blog)
Little magazines and big books at Kolkata Book Fair (Art and Culture)
Simply College Street (Art and Culture)
and more...

A Wedding And Many Tears

A City of Palaces (Travel Story)

This Oxford Summer Journal 2010, published her story, The Woods.

The Times of India published one of her poems called Those Eyes.

Turl Times featured two poems written by her, which were a part of the short stories she wrote for them.

Fashion and Beyond, a NIFT Delhi publication, published a poem called The Deep written by her.

For any services regarding writing features, any other journalistic work, fiction and poetry, or any other related event, please contact her at b.trisha10@yahoo.com.

Blogs < -- This will take you to her blog